from Plot by Claudia Rankine

Is it allowed? Am I, as a descendant of particulars, unneeded times, permitted the thing and more? This world, its worst is real. What doesn't hurt, ticking past, what doesn't intersect? Our destinations recalled, our points of fracture, of limbs crushed to memory, no more than experience, I am too aware of other ways.

A draft enters. A sketchy gust. Blown is the woman standing within her likeness. To her left the sun needs to be drawn but her hands are the shape cradling her breasts, keeping her nipples in place. Each breast is the rest floating within metonymy. Her swollen scape keeps her awake. In its milky silence she feels distaste. She holds still. She waits. The draft draws dust into her eyes. Her eyes tear until her outline dislodges, dilutes, blurs. In the time it takes to fix her face the moon is drawn quartered.
Posted by Jill Darling at 7:18 AM No comments:

Grief caused by loss. Death. Displacement. Deconstruction. There are symptoms, treatments, complications. All of these only equal moving through stages in time. Deny. Anger. Be numb. No sense of time passing, not passing, standing still, falling.

So many people show up for the funeral. From all over. Many were here for the wedding. Tell stories, look at pictures. One night we drink beer at Mike’s favorite bar down the street. The next day his dad gets up to speak during the service. We all hold our breaths, don’t hold our tears. He tells us to have faith in what happens next. We have lunch in the same room where we ate ribs and corn on the cob at the rehearsal dinner almost five years ago. You were with me then. I don’t know how things came to this.
Posted by Jill Darling at 8:22 AM No comments:

from Branches Without Leaves


Cathy Caruth explains that the traumatic neurosis is “not the reaction to any horrible event but, rather, the peculiar, and perplexing experience of survival” and asks the question “what does it mean to survive?”

The pathology or neurosis is not in the original event, but in the haunting repetition of the image or event that takes hold of the traumatized in different manifestations, and for which there may be no understanding. The obviously traumatic event for both family and friends of victims, and the general American public is 9/11, into which there is no real access, nor does it seem possible to represent. Alongside a photo of a pile of stretchers made of wood for transporting rescued victims (or bodies) from the Trade Center wreckage, Rankine writes, “The language of description competes with the dead in the air” (82). What does it mean to survive? Caruth explains, “contemporary trauma” involves “a crisis of truth” that “extends beyond the question of individual cure and asks how we in this era can have access to our own historical experience, to a history that is in its immediacy a crisis to whose truth there is no simple access” (Trauma 6). But the stretchers were, for the most part, unnecessary. There were no bodies. At first, some few survivors of the event itself, and later, family, friends, rescue workers who experienced the event only in its aftermath, and through the loss incurred.
Posted by Jill Darling at 7:47 AM No comments: 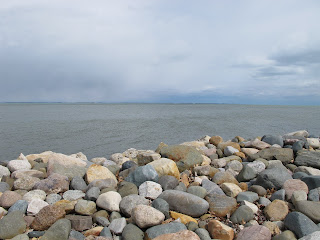 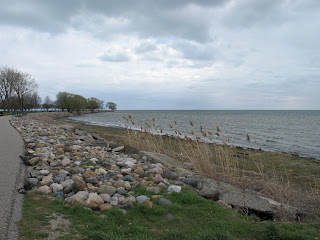 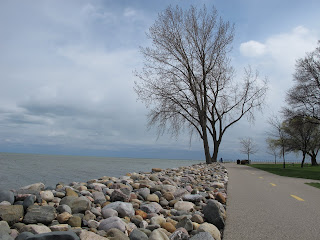 Posted by Jill Darling at 4:14 PM No comments:

The rain makes her crazy. The smells. Not able to walk around outside. She takes off, runs, leaps, climbs the neighbors’ fence, gone. Only instinct, the desire to keep going. After a squirrel, a smell. She’ll endure the consequences later, now, she doesn’t think, just goes. Later, she’ll reflect on her actions from her time-out place in the basement.

When one thing disappears, something else takes its place. Sometimes it doesn’t seem like it, or it isn’t apparent. One day I was missing you, but thanked you, quietly, for giving me the opportunity to do some things: adopt Tash, listen to myself, do more yoga, sleep in the middle of the bed. One day I forgot altogether, and then remembered: Friday happy hour, eating with friends, snow in the woods, breaths instead of thoughts.

Tash is always in trouble. She runs away and climbs fences. She gets into the garbage and pulls out things to lick like wrappers or plastic bags, or things to tear into a million pieces, like empty milk cartons. Still she is all love and energy. Her whole body wiggles when I walk in the door. She sticks her nose right up against mine and stares deeply into my eyes like she knows we are connected, like she is telling me everything will be fine, we have each other. She jumps on the bed and curls up with her body pushed as close to me as possible and we keep each other warm.

Some Buddhists say that emptiness simply means inconceivable, or infinite, potential. In order to have the opportunity to realize this potential, one must surrender to complete emptiness, release attachments, trust in letting go. Pure possibility. Like a tree with no leaves, heading into spring.
Posted by Jill Darling at 9:02 AM 2 comments:


6.
scribbled on scrap paper. you want to keep doing this into the future. sign here. date it. write it. say it. live it. the narratives we tell (ourselves). you tell hybrid stories. fact, fiction, sound misplaced, modifiers, dreams repeated as misheard memories. you decide how to narrate my past.

present elided by blurry images. you paint between lines you have drawn by hand.

re-create events for some character who has my initials, is not me. I am in a room with no door, no window, a phone that doesn’t call out. when it rings I talk to you but there is no one the other end. I can’t find my stories. filed in another room I try to narrate them for you but there are no verbs, or articles, available. I realize there is no phone. I am talking to the face I imagine is you, projected on the wall. when I wake I am on the floor. suffocating. repeating the same 3 line story wondering if you can hear me. a chant. trying to catch my breath. repeat. what happened to that paper? the one you signed? in a file with my stories. the stories you told before you disintegrated on the breeze. you are in front of me. cannot speak. mumble in nonsense syllables. lips contort. my hand goes through your chest. I wake in the corner. why did you, I repeat. I crawl into the closet. curl on the floor. the dog snores. your face moves out of focus.

(Rankine: what’s the use of forgetting if its followed by dying? this is the most miserable in my life.)
Posted by Jill Darling at 9:21 AM No comments:

"Original Material"
Posted by Jill Darling at 9:02 AM No comments:

Posted by Jill Darling at 8:57 AM No comments:

I do not think, for instance, that one can invoke the Protestant ethic when it comes to loss. One cannot say, “Oh, I’ll go through loss this way, and that will be the result, and I’ll apply myself to the task, and I’ll endeavor to achieve the resolution of grief that is before me.” I think one is hit by waves, and that one starts out the day with an aim, a project, a plan, and finds oneself foiled. One finds oneself fallen. One is exhausted but does not know why. Something is larger than one’s own deliberate plan, one’s own project, one’s own knowing and choosing.
Something takes hold of you: where does it come from? What sense does it make? What claims us at such moments, such that we are not the masters of ourselves? To what are we tied? And by what are we seized? Freud reminded us that when we lose someone, we do not always know what it is in that person that has been lost. So when one loses, one is also faced with something enigmatic: something is hiding in the loss, something is lost within the recesses of loss. If mourning involves knowing what one has lost (and melancholia originally meant, to a certain extent, not knowing), then mourning would be maintained by its enigmatic dimension, by the experience of not knowing incited by losing what we cannot fully fathom. (21-22)

On one level, I think I have lost “you” only to discover that “I” have gone missing as well. At another level, perhaps what I have lost “in” you , that for which I have no ready vocabulary, is a relationality that is composed neither exclusively of myself nor you, but is to be conceived as the tie by which those terms are differentiated and related (22).

What grief displays, in contrast, is the thrall in which our relations with others hold us, in ways that we cannot always recount or explain, in ways that often interrupt the self-conscious account of ourselves we might try to provide, in ways that challenge the very notion of ourselves as autonomous and in control. I might try to tell a story here about what I am feeling, but it would have to be a story in which the very “I” who seeks to tell the story is stopped in the midst of the telling; the very “I” is called into question by its relation to the Other, a relation that does not precisely reduce me to speechlessness, but does nevertheless clutter my speech with signs of its undoing. I tell a story about the relations I choose, only to expose, somewhere along the way, the way I am gripped and undone by these very relations. My narrative falters, as it must.
Let’s face it. We’re undone by each other, And if we’re not, we’re missing something. (23)

For if I am confounded by you, then you are already of me, and I am nowhere without you. I cannot muster the “we” except by finding the way in which I am tied to “you,” by trying to translate but finding that my own language must break up and yield if I am to know you. You are what I gain through this disorientation and loss. This is how the human comes into being, again and again, as that which we have yet to know. (49).
Posted by Jill Darling at 11:02 AM No comments:

a geography of syntax

At the Intersection of Three from Dancing Girl Press

Buy a Copy from Me Directly

Jill Darling
Detroit/Ypsilanti
writes poetry and creative nonfiction and some other kinds of fiction and whatnot...she has a ph.d. in 20th century American literature and spends a lot of time teaching and playing with her dog Tasha...