Went to Dachau
the other day:

We went together as a group: Americans, Germans, Romanians. We have been meeting and sharing discussions of culture, theory, mobility, politics for a week. And today we walked around quietly and thought about history. History in the present. The past brushed against the grain of contemporary knowing, questioning, feeling, trying to understand.

Arriving by train, the town of Dachau is a little outside of Munich, and is a beautiful little Bavarian German "suburban" town. It is spring so everything is green. Flowers. By afternoon the sun was out and everything seemed clean and quaint. Apparently, when the concentration camp was liberated, the local townspeople were brought in to see just how much violence and destruction was caused there. The film image shows onlookers turn away in disgust when they see the pile of corpses, in various states of decompose, in the crematorium; the bodies in the last months before the liberation were piled up, or buried in mass graves, because there wasn't enough coal to run the cremation fires.

We think how strange to live in this town, with this memorial site right in the middle.

From the train to the bus and we are left off in what seems like a lovely park. Trees. A little river. The stone road continues on into more residential areas. We walk through the memorial site, on the path lined with trees, and then through the gate that opens into the prisoner area. The roll call area. The barracks area. The "maintenance" building that once housed the baths, and where prisoners were hung up by their wrists from the ceiling as punishment or just for torture, now serves as the museum. History explained in texts and displays. Artifacts and photos. 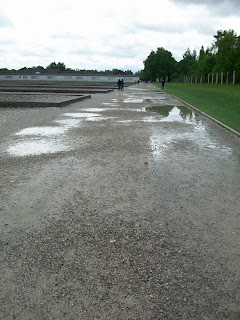 Walk down the gravel road past the former barracks' foundations, pass the religious monuments, erected for reflection from a variety of denominations, and across the bridge into the crematorium area. The small original building and the larger, assembly line style buildings are set among trees and pathways lead out into a small woods that reminded me of the paths one might take for reflection and meditation at a retreat center. But here, instead, one now reflects on the graves marked for the thousands who died, were cremated, and buried en masse.

The experience is obviously strange and difficult. Intense and quietly meditative. History in memorial. Signs and paths and museum displays show us history on site. Site non site of trying, still, to make sense of. It seems strange to eat lunch in the cafeteria after, head back tired, eventually moving into the conversations that locate, help some of us think further, or at least, think present, in the context of.
Posted by Jill Darling at 9:45 AM No comments:

from The Transformation by Juliana Spahr

“Flora and fauna grow next to and around each other without names. Human add the annotation. They catalogue the flora and fauna, divide them up, chart their connections and variations, eventually name them, and as they do this they read into them their own stories” (13).

“Huehue is the name of a climber native to the islands. Haole is the word that is used to describe some of them in this story, people who arrive from somewhere else. In the world of plants it is also used to describe a particularly noxious and invasive species” (14).

The politics of the island were more complicated than the boths of the beauty of the island. The politics were not really built around boths but instead around the one or the other. The politics were something else altogether. They were a part of the island that bit into them and those around them with bladelike, piercing mouthparts that stabbed through the skin and then injected a saliva that teemed with digestive enzymes, viruses, and anticoagulants. This bite often left behind an annoying itch, a reminder that things were not both the one and the other, could not be both the one and the other because both made no sense because there could not be both colonialism and sovereignty. (39)

The gray matter at the back of their brain told them to move to the islands in the Atlantic because the islands were known for their perversions and various sexualities and they wanted to live someplace known for its perversions and various sexualities. The gray matter at the back of the brain wanted to move to the place that self identified as a place of complicated sexuality, a place for people who liked to be getting in and out of various beds in various different ways. A place that celebrated different beds and different ways of bedding down and around. The islands in the Atlantic, were full of perversions of all sorts and the stories told about the people of the islands had all genders in all the different combinations, even the ones beyond the two that so defined their culture at this moment. They liked this. They liked it that the islands in the Atlantic to which they moved were so famous for their perversions, so famous that televangelists mentioned them often as the root of all evil. (123)
Posted by Jill Darling at 9:43 AM No comments:

a geography of syntax

At the Intersection of Three from Dancing Girl Press

Buy a Copy from Me Directly

Jill Darling
Ypsilanti
writes poetry and creative nonfiction and some other kinds of fiction and whatnot...she has a ph.d. in 20th century American literature and spends a lot of time teaching and playing with her dog Tasha...